Back in January, Brenda Ketch sent me some pictures of an unusual Evening Grosbeak that had appeared in her yard at Madawaska Lake here in Aroostook County.  The bird was clearly a male grosbeak with bright yellow body plumage and big conical bill, however it was unusually colored with a bright yellow head and neck and whitish wings.  The bird looked like a hefty canary. 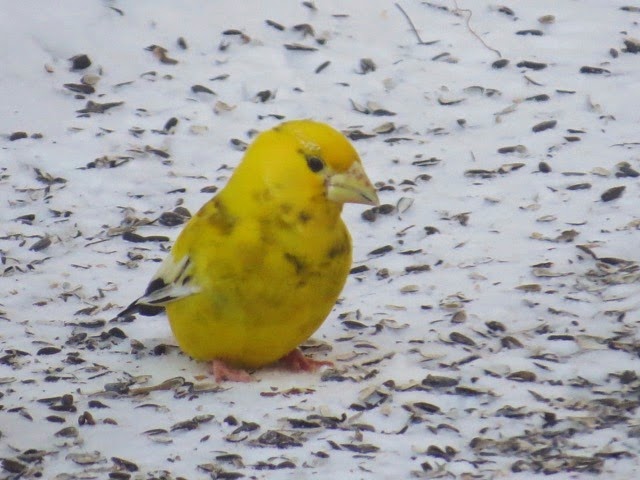 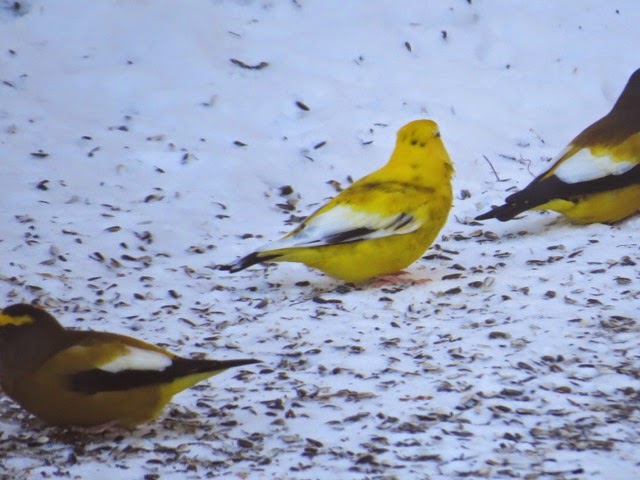 Obviously this bird had a pigment problem.  Unlike leucistic birds which are missing pigment and appear light or white plumaged, Brenda's grosbeak appeared to have yellow where it should be dark or black.

I did some reading and found there are a couple papers reporting this pigmentation condition in Evening Grosbeaks.  Xanthochromic is the term used to describe a bird that has yellow pigmented plumage where it should be some other color.  It seems to occur most commonly in red or pink-plumaged birds.   Records exist of yellow Northern Cardinals, yellow breasted Rose-breasted Grosbeaks and orangey-yellow House Finches.  A cool local example of a rare pigmentation form!  Case closed..or so I thought...

Brenda's bird kept visiting her feeder well into February and she got a bunch of great photos of the bird with its normal flock mates.  Eventually the bird moved on. 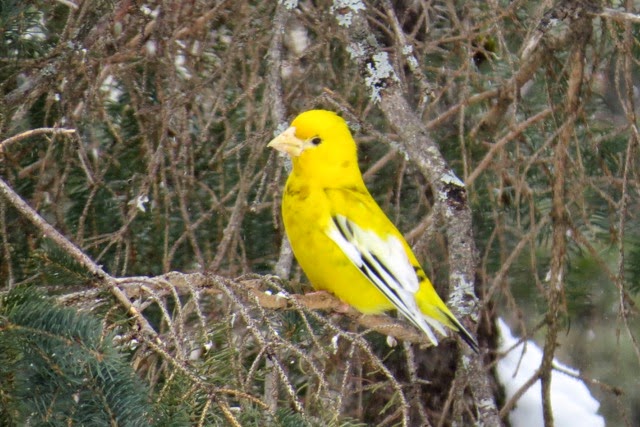 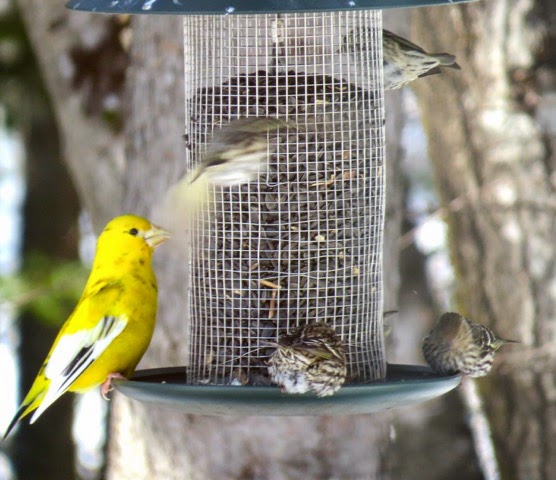 This morning I was watching the finch horde that has been hitting my feeders this winter and I was quite surprised to see a lemon yellow bird in the Evening Grosbeak flock.  Of course I scrambled to get some pictures of it.  It looked very similar to grosbeak that Brenda had photographed. 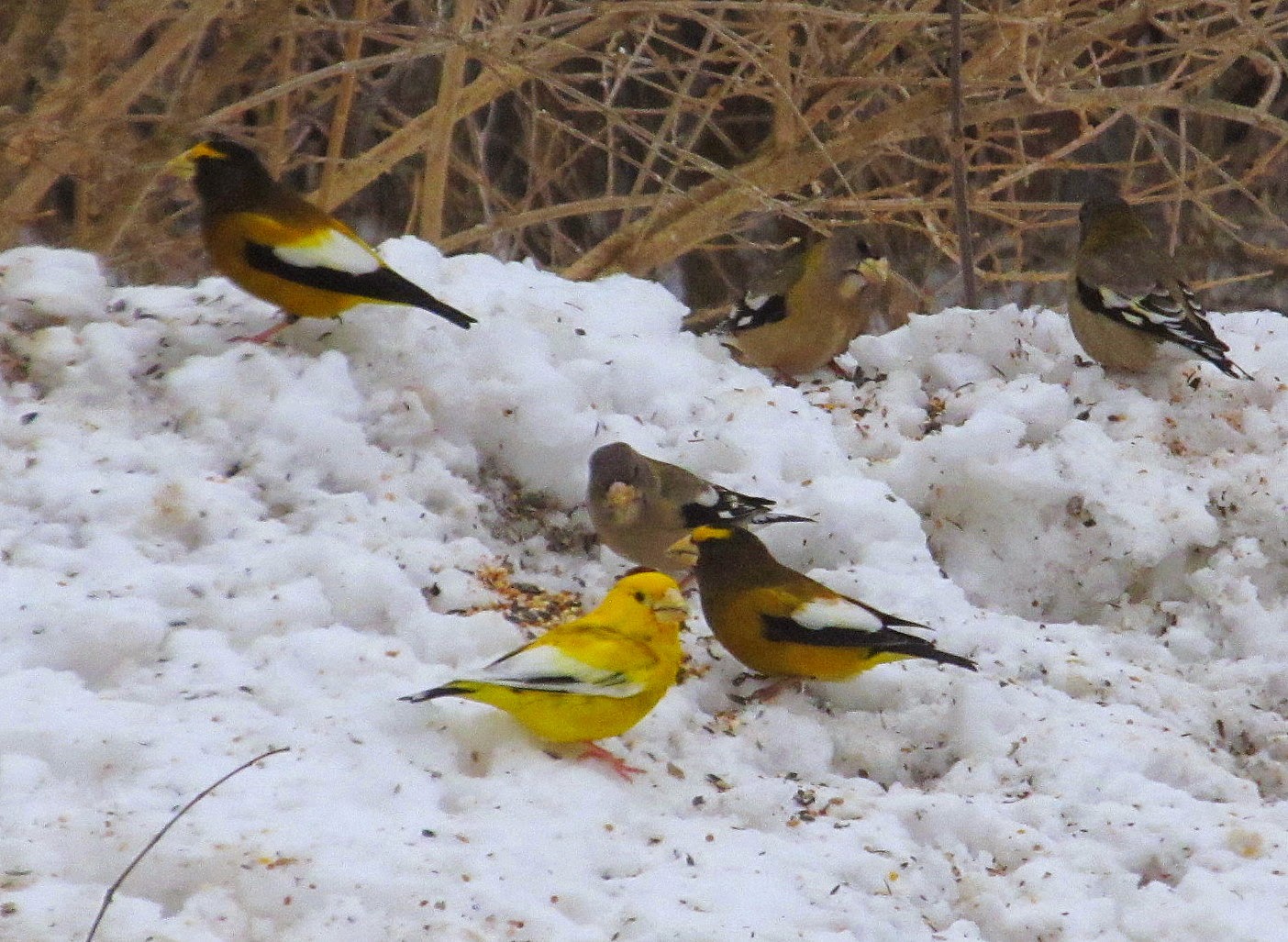 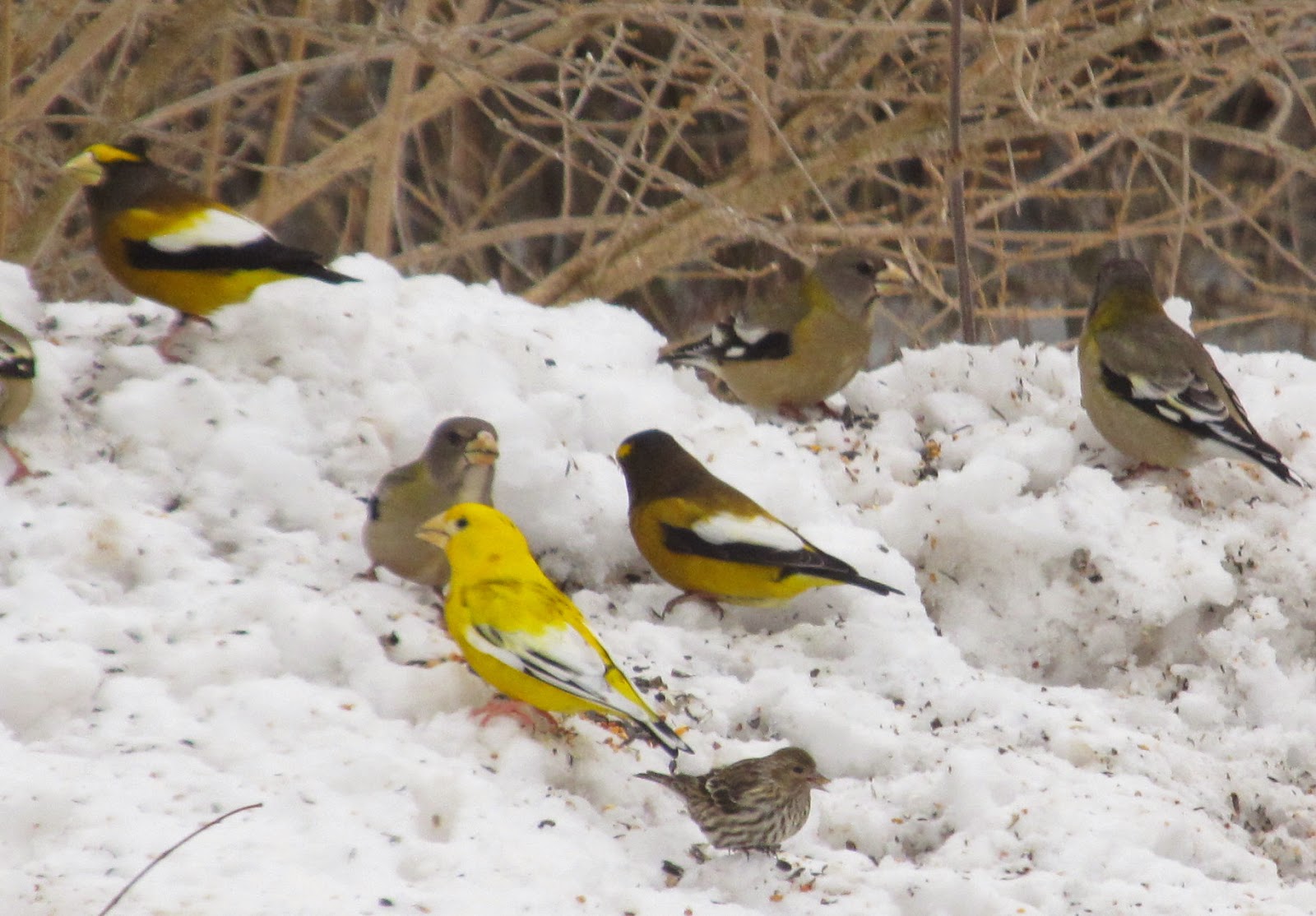 I compared the photos that Brenda has sent and sure enough, this bird had all the same marks as the Madawaska Lake bird!  Spots on the back of the head, near the eye, and on the breast were identical. Very cool that a bird seen over 12 miles away ended up here!  I made a collage to illustrate the at this was the same individual.

As I watched the bird in my yard and compared it to Brenda's photos, I noticed something that I hadn't previously:  This bird didn't just have yellow feathers replacing black feathers...in the wings and tail parts of feathers that should have normally been black were white.  It appears that the black wasn't necessarily replaced by yellow (as xanthochromism is defined)...but perhaps it was that the black was just missing in spots and the underlying pigmention (color that was obscured by the dark melanin pigment) was now visible.

Looking at normally pigmented male Evening Grosbeaks, it is clear that there is an underlying yellow pigmentation to all the head, neck and belly feathers.  These same feathers are suffused with dark (melanic) pigmentation but the yellow shows through, to varying degrees.  The underlying pigment (yellow) is concealed by the dark pigment.   The wings and tail feathers of a normal male Evening Grosbeak are primarily black with only the inner wing feathers (tertials) being white.  Without melanin it would be expected that these would be white as was the case with our bird.

So is this really Xanthochromism?

I went back to the literature and found that a few authorities don't agree that Evening Grosbeaks like ours are xanthochromic but rather use a term non-melanic schizochroic for cases where dark pigment is missing in places and revealing normally concealed pigmentation in the feathers.  This sounds like what we have here.

I haven't seen the bird again today. but it  was a great distraction in the depths of a northern Maine winter!

This is truly amazing and very infornative! Thanks for enlightening us!

I found a 5.5" primary wing feather just this morningCould it possibly be from these birds

This was in Durham NH

I have one here right now in Newfoundland,Canada! My Facebook page is Sea Trace Creations, I also have it posted on Instagram and hashtagged as xanthochromatic. Great to see pics of yours as well

I hope you enjoy the bird images posted here. Often you can click on the image in the blog and see a higher resolution version of the photo. The pictures are used with the permission of the talented photographers who willingly share their work. The images remain the property of the photographers and may not be used or reproduced without their permission.

Bill Sheehan
I live and bird in Aroostook County in northernmost Maine. Wife, two kids, drive a Ford. Prefer to find my own rather than chase other's birds. My patches are Collins Pond in Caribou, Lake Josephine in Easton, Christina Reservoir in Fort Fairfield and the Nature Conservancy's Woodland Bog Preserve which is across the street from my house.