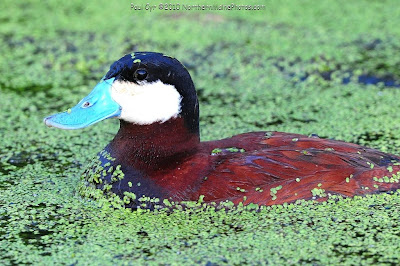 Russell Mount, Paul Cyr and I checked on the Green Heron nest at one of the marshes near Lake Josephine in Easton on Friday morning. A single adult was in the nest and, unlike my last visit on the 21st, there was no activity by the birds. The nest appears to be fully constructed and little heron now appears to incubating eggs. There was no sign of the male, but he easily could have been out of sight nearby.

The Sora and Virginia Rails are still calling in this area and seem quite numerous here. 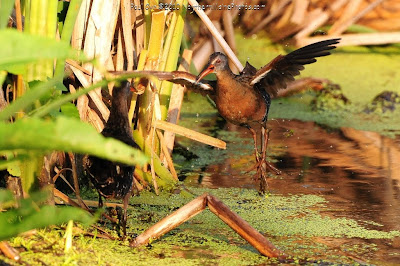 By luck, we were able to watch a couple Virginia's square off in an apparent territorial squabble. The birds were feeding and calling about 10 yards apart at the edge of the floating mats of cattails with no problem until one came into view of the other. One of the two flew over to the second bird and they immediately engaged in some wing-slapping, clawing and pecking. They were both making a squeaky, raspy "keek" call while fighting. This went on for a second or two and then they settled down, bill tip to bill tip, and pumped their heads up and down, each matching the others movements. After about 10 seconds of these head pumps, things again broke down into another tussle, though I'm not sure what happened this round since they were partially obscured during this part. They again went nose to nose and then one of the two (the bird who initially flew over to engage the other, I think) decided he'd had enough. He turned and disappeared into the cattails. The other shook and preened for a moment and then headed into the cattails in the other direction. Paul was able to get a quick shot of the two in action.

The whole engagement of these two rails reminded me a lot of the fights I would see young roosters have on my parents farm when I was growing up.

We were also treated to another testosterone fueled display, this one, by a male Ruddy Duck that patrols the marsh near the Green Heron nest. The male has been in this area for several weeks and I assume there is a hen Ruddy on a nest nearby. The male has generally been skulky and allowed only quick glimpses before, diving or swimming out of sight. 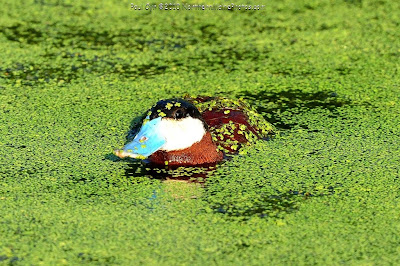 Yesterday was a different story and the gorgeous male dove under the thick layer of duck weed and came quite close to us on a couple occasions. It was interesting that the duck would make hardly a ripple when it emerged from the dive and seemed to just appear.

The male began to do its Bubble display when it was at its closest and I got the best view I have ever had of this display.

Though I could try to describe the show, Ralph Palmer in the Handbook of North American Birds provides a succinct summary of the routine: "...the drake sits high on the water, neck swollen (tracheal air sac inflated), head held as high as possible, tail angled forward so that its tip is near his nape. Then the head is drawn down 6-12 times in increasing tempo and, each time, the bill is slapped against the breast. Each jerk is shorter, until the head is merely bobbed against the breast, the bill striking the feathers near waterline (forces air from among the feathers into water and bubbles form around breast; bill does not touch water), producing a hollow tapping sound. Then the neck is stretched forward as the tail is lowered, the bill angled slightly upward, then opened, and a 2 syllabled raa-anh uttered. During this display the body feathering is raised slightly , also 2 crests, one on each side of crown, are prominent." 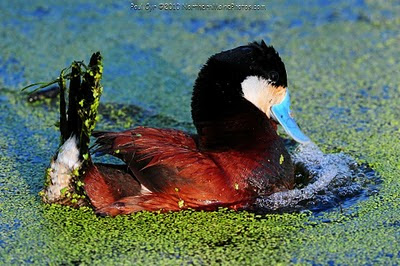 Paul was able to get lots of great photos of the drake Ruddy as it displayed. With this point-blank image, Paul froze the head bobbing/breast beating action in mid display. Head crests and tail are erect and you can see the bubbles boiling out from the the breast feathers. Though Palmer didn't mention it, at close range these bubbles being expelled from the breast feathers adds a sizzling sound to the display! 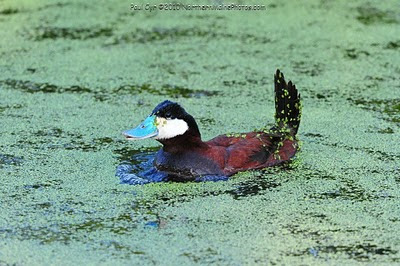 Here Paul captured the end of the display 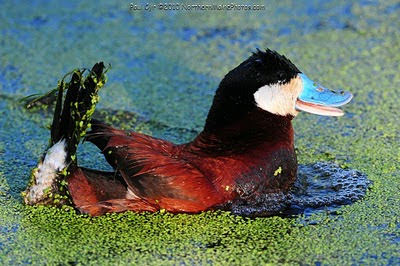 where the little duck gives his raa-anh call. I love that this duck seems to almost have lips...

A couple of otters made a patrol through the marsh while the Ruddy Duck was displaying and it was hard not to be distracted by their loud calls. The birds were definitely concerned about the presence of these marauders and all the duck broods scattered into the thick cattails as soon as the otters arrived. Common Grackles and Red-winged Blackbirds mobbled the pair whenever they emerged from the water. It appeared that one of the otters found a nest of one of the blackbirds and appeared to make short work of the contents... As we were getting ready to leave the area we discovered a Yellow Warbler had been busy constructing a nest in some Red Osier bushes, essentially right under our noses. I had noted the yellow bird flitting back and forth while we were watching the heron, rails and ducks but it took until it almost landed on my binoculars that I really took notice. The female was carrying in small dry strands of what appeared to be sedge and other marsh grass and quickly worked it into the bowl. Paul was able to get this nice shot from his vehicle as the warbler shaped the nest bowl.

Not a bad 90 minutes in the marsh! Here's the full list for Lake Jo area yesterday AM:

This report was generated automatically by eBird v2(http://ebird.org)
Posted by Bill Sheehan at 4:57 AM

I was born raised and lived in Aroostook County until I was 21!!! Little town called Linneus...not far from Drews Lake !! In all my time on the water swimming canoeing fishing etc...I have never came across the Ruddy Duck!!! He is beautiful and so unusual with that blue bill!! I enjoyed this post...I now am in the Lewiston area..but still love Aroostook County!!!!

Drew's Lake has got some great duck swamp on its south end!
The Ruddy Ducks are new thing up this way... I only started seeing them about 8 years ago and they started breeding about 5 years ago. Neat bird nonetheless

I hope you enjoy the bird images posted here. Often you can click on the image in the blog and see a higher resolution version of the photo. The pictures are used with the permission of the talented photographers who willingly share their work. The images remain the property of the photographers and may not be used or reproduced without their permission.

Bill Sheehan
I live and bird in Aroostook County in northernmost Maine. Wife, two kids, drive a Ford. Prefer to find my own rather than chase other's birds. My patches are Collins Pond in Caribou, Lake Josephine in Easton, Christina Reservoir in Fort Fairfield and the Nature Conservancy's Woodland Bog Preserve which is across the street from my house.